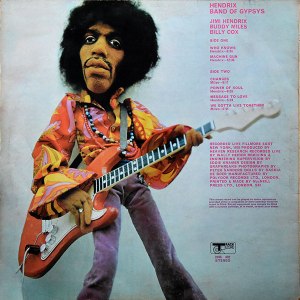 Presumably the ‘puppet’ sleeve was withdrawn once someone finally realised that Jimi Hendrix was left handed…! It also received general criticism however for the depiction of Brian Jones (who’d died the year before) along with John Peel and Bob Dylan – none of whom had anything to do with the Band Of Gypsys and only had loose associations with Hendrix. It was soon withdrawn and replaced with the Isle Of Wight gatefold sleeve (below).

Originally released with the so-called ‘puppet’ sleeve and then reissued with the ‘Isle Of Wight” photo sleeve. Subsequently reissued on Polydor.