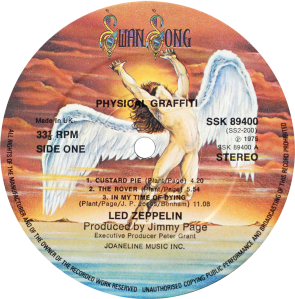 Led Zeppelin had released 5 albums on the Atlantic label and when Peter Grant had advised them of the forthcoming album to be a soundtrack to a film of live concerts, Atlantic executives were delighted to be releasing a Led Zeppelin live album…imagine their dismay when Grant reiterated that it was a soundtrack album to a film, not a live album.

Grant advised them to check the original contract which made no reference to Atlantic having the rights to release a soundtrack album…very crafty piece of business by one of the shrewdest managers in the rock business. Grant also announced their intention to form their own record label – ‘Swan Song’ – but allowed Atlantic the rights to manufacture and distribute product released on Swan Song.

The ‘soundtrack’ album was delayed with various issues with editing and was completed long after the label launch. The first UK release ended up being ‘Silk Torpedo’ by The Pretty Things, followed a few months later by Led Zeppelin’s ‘Physical Graffiti’. 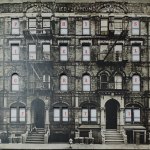 Several releases appeared on Swan Song in the US that were released on other labels in the UK, e.g. Bad Company’s self titled debut in 1974 was released on Island Records in the UK.

The first reaction to Led Zeppelin calling the label Swan Song was negative, suggesting that the band would be retiring from music…but Zeppelin proceeded as planned and also announced their intention to promote other bands and that it wouldn’t be just Led Zeppelin records.

The label was launched in May 1974 with a lavish party thrown in New York. Grant had insisted that Danny Goldberg (Vice President of the label and responsible for US operations) organised some real live swans for the party. In the end it turned out the best he could acquire were a few white geese!

The label artwork is based on a painting by William Rimmer, called ‘Evening: Fall Of Day’ from around 1869/1870. The character in the painting is the Greek god Apollo and not Icarus, as many believe. 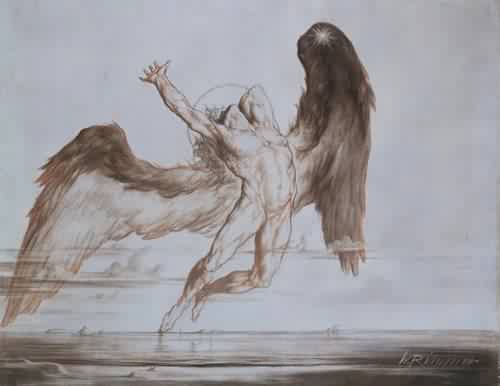 Swan Song Records discography (click the links to go to each album’s page):