A bit of a ‘cash-in’ by Gull Records on Judas Priest’s global success following 1980’s “British Steel” (released on CBS). Gull had already released a ‘Best Of’ in 1978, but at least this 2LP set featured remixed tracks. 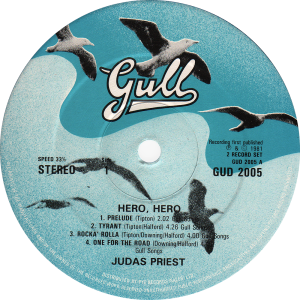 Gatefold sleeve with “Made and Printed in England” on inner gatefold, no printer’s credit. Front cover illustration by ‘Melvyn’.