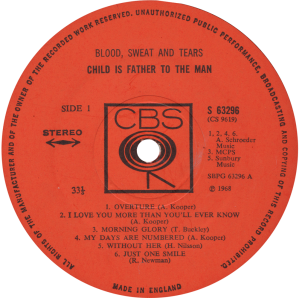 CBS (Columbia Broadcasting System) was formed in 1961 and was the international division of Columbia Records (not to be confused with the EMI owned Columbia label). CBS was distributed in Europe and UK by Phillips and its subsidiary Fontana. In 1964, CBS acquired Oriole Records which gave CBS Records its own distribution in the UK beginning in 1965. Initially, only American Columbia product was distributed alongside Oriole’s own roster on the renamed CBS label. EMI, which had distributed American Columbia recordings on its Columbia label until the Philips deal in 1951, continued to distribute CBS’s other American labels such as Epic and Okeh on that label. The distribution deal with EMI expired in 1968 at which point CBS began distributing all their labels directly.

The original orange label design features a variety of well known artists such as The Byrds, Soft Machine, Bob Dylan, Simon & Garfunkel, Santana as well as lesser known acts such as The Flock.

By the early 70’s, bands such as Journey, Blue Oyster Cult and Mott The Hoople also appeared on the original label. By the mid-70’s the plain, matt label was phased out in favour of a new ‘sunburst’ red and orange design along with a new ‘pacman’ style CBS logo.

As with all major labels, most genres are covered, so this section will not try and cover every single release on the CBS orange label, but the usual rock, prog and maybe some folk stuff too…