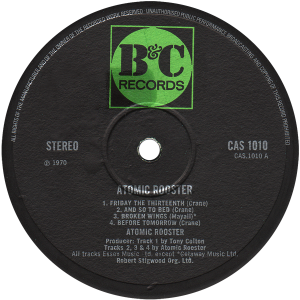 Founded in 1969 by Trojan Records owner Lee Gopthal, B&C (standing for Beat & Commercial) was designed to release progressive and folk material. Thanks to a deal with the newly founded Charisma label later that year, B&C also manufactured and distributed a good portion of that label’s early catalogue, ‘sharing’ the same catalogue numbering system of a ‘C A S’ prefix followed by four digits.

In 1971, a new offshoot label called Pegasus Records was created and the existing roster of progressive and folk artists moved over onto this label. B&C continued to distribute for Charisma and another new label in 1973, Mooncrest. B&C was sold to Allied/Saga Records in 1974 following financial difficulties.

B&C Records discography (click the links to go to each album’s page):

Full list of titles below, those in green are B&C the others are on the Charisma label.