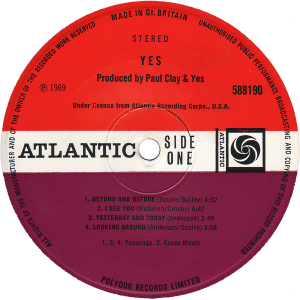 Although probably not as well known for classic rock and progressive rock (more like soul and blues), Atlantic still managed to release some fairly significant LPs by the likes of Led Zeppelin (the first 5 Lps), Yes (first 4 LPs), Vanilla Fudge, and Iron Butterfly on what has come to be known as the ‘red/plum’ label – although strictly speaking it’s more orange than red…

However, particularly with the Led Zeppelin LPs, what is perhaps most interesting is the sheer quantity of label variations on nearly all the initial 5 releases – various errors and mistakes abound resulting in numerous issues of each LP and therefore making each variant highly collectable in their own right.

By the end of 1971, the label design changed to the more familiar green and orange design and also adopted the catalogue system of a K prefix followed by 5 numbers – primarily as a result of the shift in ownership in 1969 to the Kinney National Company, which then created a company called Kinney Record Group Ltd which was responsible for the distribution of Atlantic Records product. By 1972, and following the earlier acquisition of the Elektra brand in 1970, Warner Bros. (which had owned Atlantic Records since 1967) now called itself WEA Corp. after the initial letters of Warner, Elektra and Atlantic. Following the release of Led Zeppelin’s “Houses Of The Holy” LP in 1973, the label design was subtly tweaked once more to include the new group logo of a ‘W’ within a lozenge.