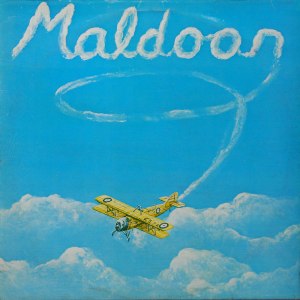 Only thing is…CMU’s album was released on the Transatlantic label back in 1971…some 2 years before Maldoon’s 1973 album. Maldoon’s cover was a painting by Eric Slack. Not sure who did CMU’s cover…

And in case you’re wondering whatever happened to Curtiss/Maldoon, Madonna ‘reworked’ their “Sepheryn” track for her “Ray Of Light” song back in 1998. So much so, that Dave Curtiss and Clive Maldoon were actually given (quite rightly) a songwriting credit for the track. Maldoon died in 1978 from overdosing on prescription medicines. 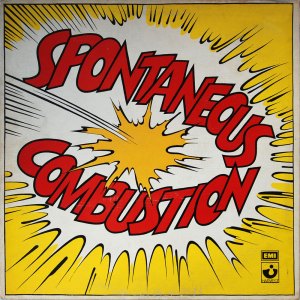 Now they are both in the style of Roy Lichtenstein, but Spontaneous Combustion’s album was released in 1972, with World Party’s “Bang” album coming out in 1993.

There’s a similar theme with these two sleeve designs, too. Both albums feature the band members’ faces within the liquid or reflection of either a glass beaker full of chemicals or a wine goblet. Home’s “The Alchemist” from 1973 predates Deep Purple’s “Come Taste The Band” by 3 years. It’s also a much better design with better photography and a less-clumsy execution of the band members mugshots in my opinion.

Let me know if you find any more similarities on the site…!